The East Asian-Australasian Flyway is the name given to the route flown annually by Australia’s migratory shorebirds to and from their breeding grounds above the Arctic Circle in Alaska and Siberia, and it extends from Arctic Russia and North America to New Zealand. The twenty-three countries that comprise the East Asian-Australasian Flyway (i.e. are countries in which the birds have been recorded during their migrations) are: the USA (Alaska); Russia (Siberia); Mongolia; China; North Korea; South Korea; Japan; the Philippines; Vietnam; Laos; Thailand; Cambodia; Myanmar; Bangladesh; India; Malaysia; Singapore; Brunei; Indonesia; Timor; Papua New Guinea; Australia and New Zealand.

Some five million migratory shorebirds spend the warmer months of the year on the productive shores of Australia and New Zealand. Come May they sense the shift toward cooler days and prepare for their long migration which takes them up the eastern seaboard of Asia to their breeding grounds in Alaska and Siberia. This preparation involves eating to the point where they almost double their body weight. This is literally the fuel that will take them the thousands of miles they need to go to reach their breeding grounds. As they prepare for the migrations their bodies will also make the most amazing adaptations. For instance, to reduce weight, and in anticipation of long-distance stretches of non-stop flight, their digestive tract will temporarily atrophy.

No-one knows precisely how they find their way, but we do know that migratory shorebirds can sense the earth's magnetic field to discern a northward route from a southward one, and it is believed that they can use markers such as stars and mountain ranges to map their migrations.

Above the arctic circle, for about ten months of the year, the ground of Siberia and Alaska is frozen solid. But the 24-hour summer sun brings with it a brief thawing of the permafrost, resulting in the formation pools of meltwater teeming with insect life. The shorebirds arrive into this abundance of food and light, and in the brief six to eight weeks of the arctic summer they mate, lay eggs and hatch their young. Shorebird chicks, perfectly camouflaged against the sedges and pebbles of the tundra, are precocial which means they are born with the ability to feed themselves. This is just as well, as within weeks of their hatching their mothers will take flight on the long journey southward,  only to be followed also by their fathers. The newly-hatched juvenile shorebirds are left to negotiate the onerous flight to the southern hemisphere on their own.

On the way to and from their breeding grounds, the birds may make stopovers to rest and refuel. Of all the places where the birds take their rest, the most important is the Yellow Sea. Bordered by North and South Korea and China, this is a bottleneck of fertile shorebird habitat through which thousands of shorebirds will pass annually on their migrations.

To ensure the survival of these amazing travellers, every Flyway country has an important role to play in preserving the wetland habitats they use during their migration. Australia and New Zealand, however, have a particularly important role in terms of looking after our migratory shorebird habitat as it is on our shores that the birds spend the longest period of their migratory cycle from October to May every year.

The shorebirds’ annual migration, and their dependence on international wetlands, illustrates how habitats around the world are connected, and how important it is to protect them. 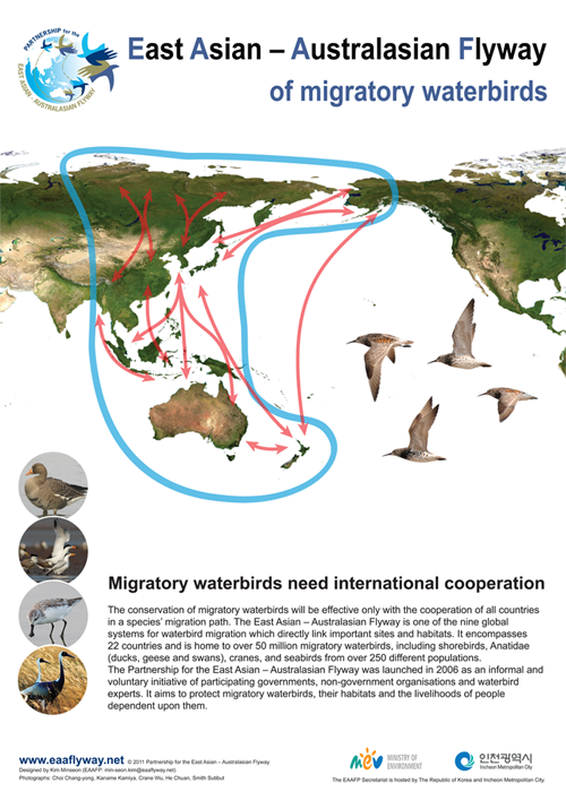